The documentary explores the events in the past decade in Brazil known as “rolezinhos”, in which a large crowd of young black people, many of which from peripheral neighborhoods, occupied downtown shopping malls and exposed the structural racism crystallized in these symbolic borders. From the lives of three such characters, and mobilizing rich archival material, the film commits to an activist stance and evinces the echoes between different contexts and political and subjective resistances, addressing Brazil’s everyday abysmal social and racial inequality. *(C.I) 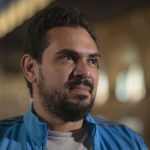 Nominated for the International Emmy for best documentary of 2019 with "A Primeira Pedra", Vladimir has been directing and scripting documentaries since 2008. His films investigate the political and cultural transformations in Brazil in recent years based on the struggles of urban movements. He has directed five short films, two feature films, a series, and a telefilm, and has participated in more than 50 festivals around the world and received several awards.

SUBTERRANEAN
TAMGÙ
BIA PLUS ONE